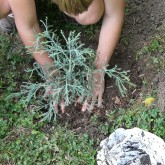 Being a steward both of one’s inner life and the planet, implies a guarding and valuing, a trust.  In the Hebrew scriptures humans are entrusted with the fruits of the earth.  This implies a participation in the fertility and goodness of the earth, even to the point of vegetarianism before the Fall.  In Genesis 1:29, we are told, “And God said, ‘Behold, I have given you every plant yielding seed which is upon the face of the earth, and every tree with seed in its fruit; you shall have them for food.’”

Only after human beings lost their deep relationship with the divine, did they bring violence into the garden, as stated in Genesis 9:2:

The fear of you and the dread of you shall be upon every beast of the earth, and upon every bird of the air, upon everything that creeps on the ground and all fish of the sea:  into your hand they are delivered. (1)

The above quotations from Genesis give us the original story, and its view of why human beings changed from participators to users.  The later scriptures of the New Testament and Qur’an, along with the examples from Muslim and Christian saints, define how the human can return to the garden.

If our true role is as stewards, the question for today is, how is such a role described by these two traditions?  And, further, how does this spirituality guide us into a more ecologically reasonable point of view?

I would like to spend a bit more time on the Hebrew scriptures, since they are the foundational home of Islam and Christianity, and the weltanschauung from which Muhammad and Jesus were nourished.

For example, one of the great wisdom figures referred to by both traditions was Solomon.  Solomon was and is an archetypal human who represented wise leadership and understanding.  It is significant to note that Solomon is defined, not by his “ability to render justice – not even his ability to rule effectively…rather, it is his encyclopedic knowledge of his environment” (2) which describes his identity.  In King 29-33, we read:

And God gave Solomon wisdom and understanding beyond measure, and largeness of mind like the sand on the seashore, so that Solomon’s wisdom surpassed the wisdom of all the people of the east, and all the wisdom of Egypt.  For he was wiser than all other men…and his fame was in all the nations round about.  He also uttered three thousand proverbs; and his songs were a thousand and five.  He spoke of trees, from the cedar of Lebanon to the hyssop that grows out of the wall; he spoke also of beasts, and of birds, and of reptiles, and of fish.

Solomon then, knew his world.  He was able to study, learn and be in his world as a role model because of the very fact that his wisdom was based on an understanding of how trees, humans, plants, beasts, and all birds all interact.

The horrible indictment of Genesis 9:2, describing the human as an enemy of the environment, may be changed.  This change, though, may only come about if humanity pursues the path of stewardship and peacemaking.  In the oft-quoted words of Hosea:

And I will make for you a covenant on that day with the beasts of the field, the birds of the air, and creeping things on the ground; and I will abolish the bow, the sword, and war from the land; and I will make you lie down in safety. (3)

Stewardship is the paradigm of human existence lived in safety and peace.  It implies entrustment, and caring, but more than these, stewardship goes to the heart of Jesus’ and Muhammad’s teachings:  that we were created to come home to God.

Our home with God was symbolized by walking with the divine presence in the garden in the cool of the day.  That relationship forges within us an increasing desire to be kind to all life, which in itself also reflects that divine presence.  When we have learned to love our own divine nature, we will then recognize our partnership in the splendor surrounding us.  And only then, will human beings begin to be a part of the kingdom of peace on earth as described in the gospel of Mark:

With what can we compare the kingdom of God, or what parable shall we use for it?  It is like a grain of mustard seed, which, when sown upon the ground, is the smallest of all the seeds on earth; yet when it is sown it grows up and becomes the greatest of all shrubs, and puts forth large branches, so that the birds of the air can make nests in its shade. (4)

1.   Genesis 9:2.  Cf the excellent essay by William Dyrness, “Stewardship of the Earth in the Old Testament,” in Tending the Garden,  edited by Wesley Granger-Michaelson (Michigan:  William B. Eerdmans, 1987).