Buckminster Fuller And a You-And-Me World

Excerpted from the book, The Soul of Money, by Lynne Twist

It could be the most significant turning point in our evolution because it meant we could move from a you-or-me world—a world where either you or I make it, and where we need to compete and fight to see who wins—to a you-and-me world, where all of us can make it.

It was in my work to end hunger and in the commitment it awakened in me that I began to see this whole construct of scarcity, and its pervasive mythology, language, and life sentences. I saw how it infused my own life, as well as the lives of my friends and family, and the lives of people with whom I worked in countries as poor as Bangladesh, and as rich as France, England, or the United States. In what proved to be a turning point for me, I had an opportunity to listen to the great futurist and humanist, R. Buckminster (“Bucky”) Fuller. In the 1970s, Bucky was speaking broadly about mythologies in basic science that blocked us from an accurate vision of the world and its capacity to support a prosperous life for all.

Bucky later became a friend and mentor, but the first time I heard him speak I knew him simply as a controversial genius—a designer, engineer, and architect—who was giving a series of speeches around the world entitled “Integrity Days.” I was a volunteer at his talk in San Francisco, and in an auditorium that held an audience of two thousand or so, I remember sitting in the second-to-last row of seats, watching this small, eloquent, and radiant older man on the stage express with great exuberance his insights and revelations about the way the world works. His ideas were not just eloquent, not just provocative, but for me completely revolutionary and transformational.

I was riveted by his talk and the distinctions he was making, but the one that changed my life was when he said that for centuries, perhaps thousands of years, we have lived in the belief that there’s not enough to go around, and that we need to fight and compete to garner those resources for ourselves. Perhaps it had been a valid perception at one time, or perhaps it hadn’t been, he said, but at this point in history—in the 1970s—we were able to do so much more with so much less that as a human family we clearly had reached a point where there actually was enough for everyone everywhere to meet or even surpass their needs to live a reasonably healthy, productive life.This moment represented a dramatic breakthrough in the evolution of civilization and humankind, he said.

Whether it was a recognition of something already true or a moment of transformation in the status of civilizations, he said, either way it could be the most significant turning point in our evolution because it meant we could move from a you-or-me world—a world where either you or I make it, and where we need to compete and fight to see who wins—to a you-and-me world, where all of us can make it. In that you-and-me world, all of us have enough food, enough water, enough land, enough housing,enough of the fundamental things for each one of us to live a fulfilling and productive life.

This was the beginning of a global society, a global consciousness, global humanity, and from there this recognition of the finite but sufficient resources of this planet for all who live here—humans, plants, and animals alike—became the potential reality of the future.

This new threshold completely changes the game, and it would take fifty years, he predicted, for us to make the necessary adjustments in our world so we could move from a you-or-me paradigm to you-and-me paradigm, a paradigm that says the world can work for everyone with no one and nothing left out. He said that our money system, our financial resources system, would need to adjust itself to reflect that reality and it would take decades for us to make that adjustment, but if and when we did, we would enter an age, a time, and a world in which the very fundamental ways we perceive and think about ourselves and the world we live in would be so transformed that it would be unrecognizable… 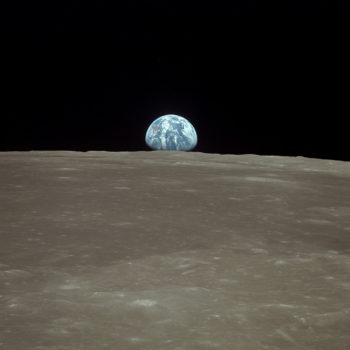 …Bucky also was working from a changing worldview that had begun to emerge following the first manned lunar landing by the crew of Apollo 11 in the summer of 1969. Historic and breathtaking photographs of the Earth from the moon gave humankind its first clear view of our planet as one complete, whole “spaceship Earth” as Bucky called it. In that moment we moved from being a part of the system to moving far enough outside the system so we could see Earth as a whole, and we could see its fragility, its beauty, its completeness, its exquisite integrity. I would venture to say this was the beginning of a global society, a global consciousness, global humanity, and from there this recognition of the finite but sufficient resources of this planet for all who live here—humans, plants, and animals alike—became the potential reality of the future.

From THE SOUL OF MONEY: TRANSFORMING YOUR RELATIONSHIP WITH MONEY AND LIFE by Lynne Twist. Copyright © 2003 by Lynne Twist. Used by permission of W.W. Norton & Company, Inc.