This was my chance to call the Pope’s attention to whatever seemed most important to me for the future of the Church. But what was that?

It was a great joy for me when my dear and generous friends Johannes and Brigitte invited me to travel to Rome with them for a few days, do some sightseeing with a most knowledgeable private tour guide, and – yes, meet Pope Francis in an audience! I was quite overwhelmed by gratitude, but also by the responsibility that an opportunity to talk with the Pope brought with it. What would we be talking about? What would my friends want me ask him, or to tell him? This was my chance to call the Pope’s attention to whatever seemed most important to me for the future of the Church. But what was that?

After a good deal of thought, i decided that the pivot point with the most effective leverage for change would be the Principle of Subsidiarity. For more than a century, by now – starting with Leo XIII in 1891 – Popes have upheld that guiding principle for the reform of business and society: Every decision ought to be made on the lowest level, by the people most immediately affected by it, and only in matters that go beyond their capacity the next higher level of administration should be called upon to decide. This means a flow of power from the bottom up, rather than from the top down. Today, masterminds of business and industry have made this principle of Catholic social teaching their own and are applying it with much success – but Church administration is still stuck in the outdated model of the Power Pyramid.

Both, Pope Francis and his adversaries in the Vatican do fervently want unity. The Principle of Subsidiarity would be the key to that unity.

The earliest Church was a network of small communities, following the principle, “In essentials unity, in all other respects variety,” as we would put it today. But soon, and throughout Church-history, unity was taken to mean uniformity. This disastrous misunderstanding turned missionary effort into colonialism and caused even wars between Christians. Given today’s proud self-awareness of cultures all over the world, a world Church’s attempt to enforce uniformity must threaten its unity. Both, Pope Francis and his adversaries in the Vatican do fervently want unity. The Principle of Subsidiarity would be the key to that unity. Pope Francis could appeal to this principle and apply it to the Church since the teaching of his predecessors has given it a weight and prestige that even his adversaries would have to respect.

Therefore, i summarized my request of Pope Francis – to speak about the practical application of the Principle of Subsidiarity to the Church – in four short Spanish lines: 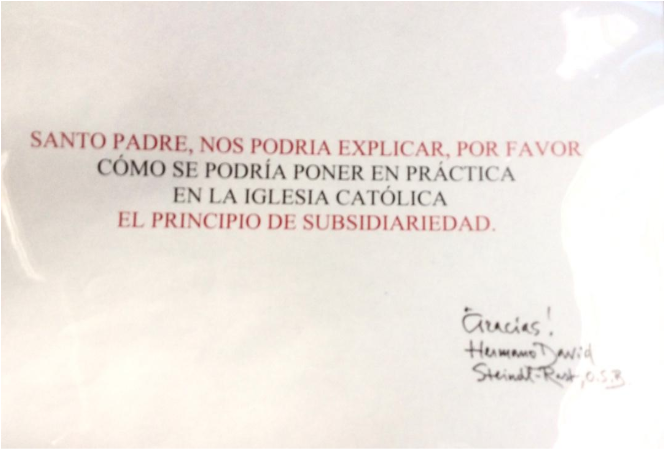 English translation: Holy Father, could you explain to us, please, how could the principle of subsidiarity be put into practice in the Catholic Church? Thank you!

The audience was my opportunity to hand him a sheet with my request: 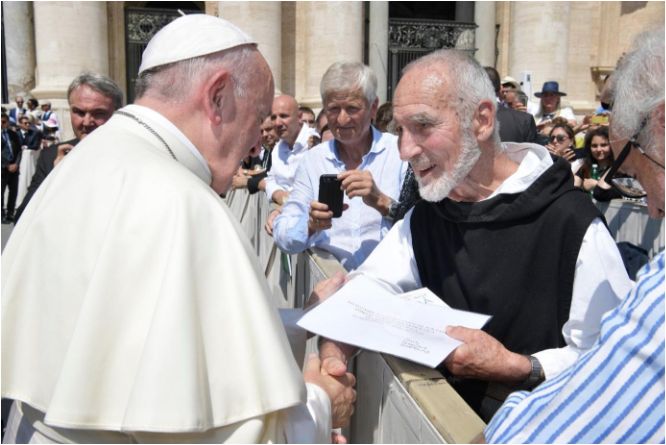 Now, looking at the snapshot, i have to laugh at my insistence in pointing to the key word – “Principle of Subsidiarity”. 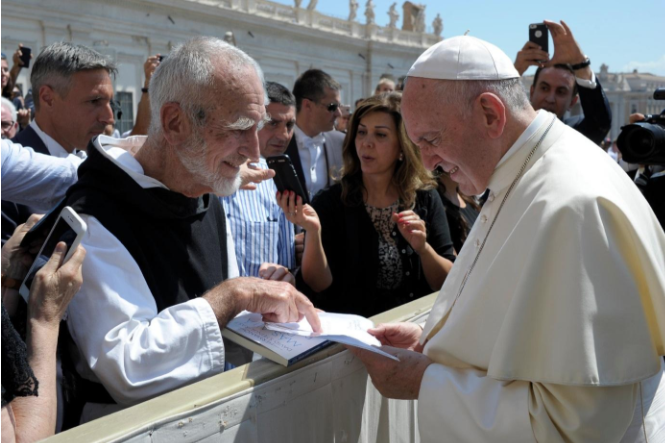 Although the audience lasted only a few minutes, i did not at all feel rushed. Pope Francis took his time and read my lines with full attention. 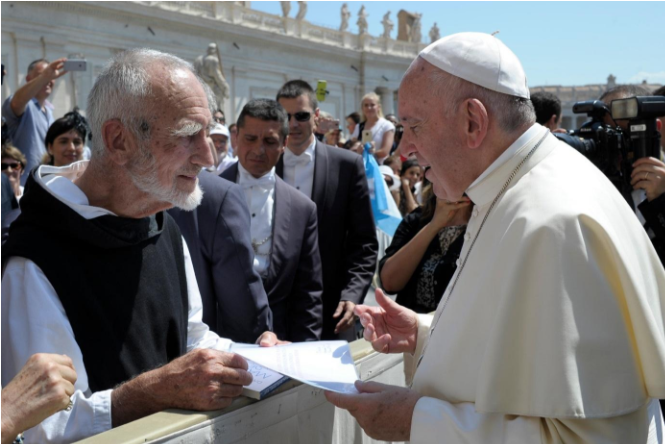 I cannot recall the wording of his reply, but it was clearly positive and encouraging. 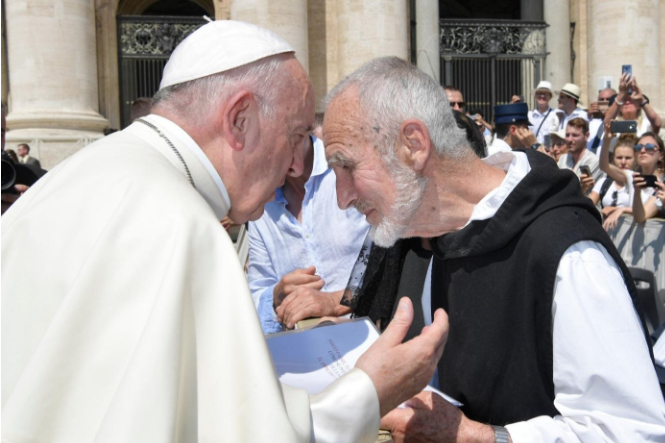 I had been prepared for the much-praised warmth and kindness of the Pope. What took me by surprise was the joy he radiates in spite of all the resistance put up against his reforms. (In the reply to a letter of mine in 2016 he had written: “Las resistencias existen. Le pido, por favor, que rece por mì.” – The resistances exist. I ask you to pray for me.) 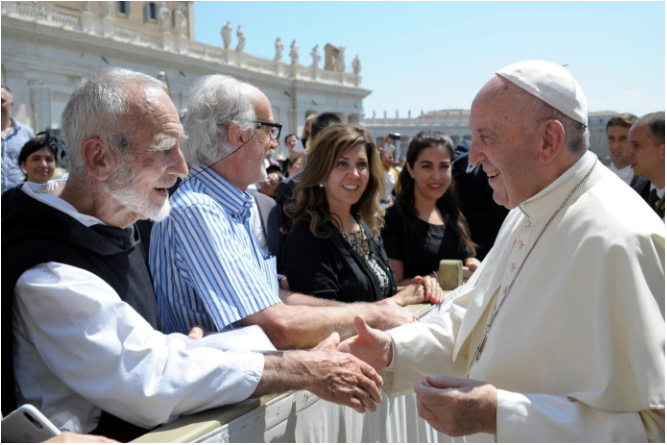 And i, in turn, ask you, my Friends, to send Pope Francis good energy by whatever prayer or other inner gesture that feels right to you. And i wish you – regardless of what may happen – a share in his radiant joy.

Heart to heart,
Your Brother David