This month’s Grateful News focuses on a brave woman finding earthquake survivors; a beautiful new alternative to wigs during cancer treatments; a man who comforts the terminally ill who otherwise would have no one; the discovery of Einstein’s thoughts on happiness, and video proof that our animal friends do experience “love”… 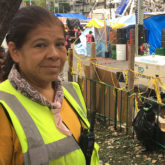 When Buildings Fall, these Rescue ‘Moles’ Dig for Survivors 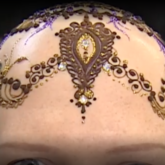 For cancer patients undergoing chemotherapy, losing their hair can be an extremely difficult and upsetting consequence. But now, there’s a new alternative to wigs and hats. Abi, who is supporting the fundraising campaign Stand Up To Cancer, explains how she faced her diagnosis and treatment. > > See Video 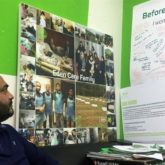 The Man Who Befriends Terminally-Ill Muslims

Abu Mumin is a social worker from London and part of an organisation called Eden Care, which provides companionship to terminally ill people, most of whom are estranged from their families, and their final weeks of life would otherwise be spent alone. >> Full Story 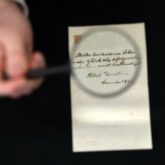 Einstein’s Note on Happiness, Given To Bellboy in 1922

On a piece of hotel stationery, Einstein left a note written in German which stated his theory of happiness: “A calm and modest life brings more happiness than the pursuit of success combined with constant restlessness.” Although that scrap of paper just sold for a lot of money, its message is free and priceless. >> Full Story 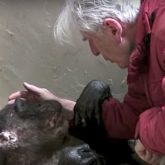 Nearing the end of her life and dwelling in her own mental world, something wonderful happens to stir chimpanzee “Mama’s” awareness and her spirit. Through a constellation of factors we witness Mama display an emotion the world of science for too long was reluctant to assign to animals: love. >> See Video