Finding Faith After a Brush with Tragedy

When a faith-challenged mother has a brush with tragedy, suddenly it all makes sense.

“Is she sad?” My 4-year-old gazes up at a mother cradling the lifeless body of her only son. Our Lady of Sorrows. Something squeezes in my chest like a fist. “Yes,” I whisper back. “She’s sad.” 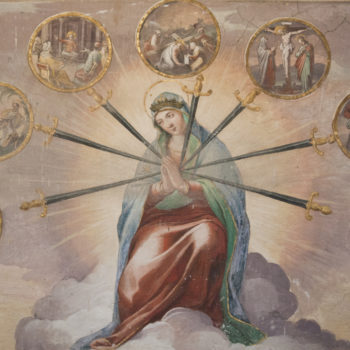 We’re in a church in Florence, beholding the magnificent frescoes. Close friends, here on a year’s sabbatical, have invited us to their grandissimo appartamento—the trip of a lifetime! But our joyful, Chianti-fueled reunion has gone horribly wrong. At this very moment, 20 minutes away by taxi, in the Ospedaliero Careggi, our friend Samara is trying not to give birth to a baby that’s due in February. It’s October.

I am not religious. I am what you might call spiritual, but I grasp after this spirituality as awkwardly as a person picking buttercups with oven mitts on. We have so much to be thankful for—our friends and family, our health, our very lives—and I never know exactly how best to convey my gratitude. Mostly it finds expression in the way my eyes sometimes fill with tears when I’m serving my family oatmeal, and in the sudden blurting of the words “I’m so lucky,” while my children, who are too young to roll their eyes, smile at me. Every evening we hold hands for a moment before dinner, and when we hear the kids say the word “blessings” in their high, clear voices, we know that we are blessed. Although when my atheist parents are visiting, their visible shock at this ritual might lead you to imagine that we’re Hare Krishna-ing around the table with tambourines. My father sighs, puts down his forkful of lasagna to hold the children’s soft fingers in his own. “Is there more? Or can we maybe eat already?”

My parents’ good marriage provided passion enough for one household, and its context felt like the setup for a bad joke: What do you get when you cross a nonobservant Jew with a disgruntled Catholic raised by skinny, malevolent nuns? You get matzoh topped with cream cheese and bacon—that’s what you get. You get abundant love, ardent but secular. And maybe you get a daughter with a secret fascination with religion.

Religious illumination came to me less like a beam of light through the clouds than like the molten, shifting shapes inside a lava lamp. I devoured the ’70s bible Are You There God? It’s Me, Margaret, in which I learned that Our Heavenly Father had His holy hand in such tween concerns as the proper pronunciation of menstruate (men-stroo-ate?) and the proper fitting of a training bra. I wondered about prayer: Did it feel like blowing out birthday candles and wishing for the beauty parlor Barbie head, the one with real pretend makeup, that seemed too frivolous to ask for aloud? I squinched my eyes shut. “Please God, let me get my period,” I prayed, following Margaret’s lead. It felt phony and embarrassing.

I read Anne Frank and the Elie Wiesel trilogy, guiltily fascinated by the magnitude of the suffering. I wanted to be more Jewish. I wanted to go to Hebrew school like many of my friends, but I might have been more impressed by their disco Bat Mitzvahs and wrists full of semiprecious bracelets than by anybody’s knowledge of the Torah. This was around the same time that I wrote a school report on stained glass windows, and sat alone in a church with my colored pencils until I got a major case of the creeps; I tried to imagine that these creeps were really the fingers of God, reaching into my unbelieving soul.

“We started our family with a belief in intelligence, justice, and gratitude”

Later, I gazed happily at the smorgasbord of religious practice: I meditated with a cute, incense-flavored boy from my college Buddhism class, swayed joyfully at the teeny local gospel church, damned the patriarchy at the Womyn’s Vegetarian Passover Seder, and, less spiritually, played roller hockey in what happened to be a Methodist parking lot. No one was overly surprised when I married another agnostic Jewish-Catholic hybrid.

We started our family with a belief in intelligence, justice, and gratitude that we practice with fervor if without precise religious underpinnings. We expose our children to different philosophies and holidays, and we try to answer their questions respectfully, as when my son, Ben, recently asked, “How did people start?” I was cleaning banana smoothie out of the blender lid and should probably have turned off the faucet, checked a book out of the library, and sat down with him. Instead I lurched into an on-the-fly explanation of evolution: There was a kind of plant in the water, and the sun hit it just right, and it became alive. (One problem with the practice of reason, I was thinking as I flipped through the files in my brain, is that you really need to stay on top of the facts.) Then it turned into a kind of fish and sprouted legs, the way tadpoles do, and it crawled onto the land and, over a very long period of time, grew into other animals. “There,” I thought, but Ben was silent for only a moment before saying, “I don’t really understand how something wasn’t alive and then it was.” And when his father, Michael, answered, “It was kind of a magic thing,” I shot him a look—”Magic! After all my rational prattle!”—and he shrugged. “Some things just seem kind of magical,” he said.

In the church now, I am thinking about faith. The last time I was in Florence, I was a 20-year-old student of art history, memorizing facts about these very paintings in between bouts of shoe ogling. I remember dates and styles, periods and pigments, but I do not actually remember feeling anything particularly deep: When life stretches out before you, it can be hard to connect with faith or death as rendered on canvas or in stone. But now we’d returned, and one minute we were happy, prosciutto-buying tourists; the next we were in a taxi, speaking terrible, urgent Italian to the obstetric intake nurses and distracting our kids and Sam’s toddler so that Sam—who had an amniotic sac bulging out of her body—could focus on the important work of not giving birth 15 weeks early. 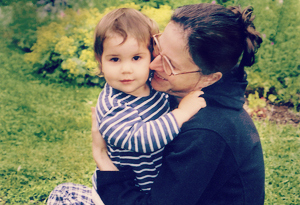 The author with daughter Birdy in the summer of 2004.

Our days filled with the children’s sticky, gelato-covered faces, with our worry, with the old women who crowded around me to admire our dark-haired 8-month-old baby. “Bella,” they oohed and aahed. “Bellissima!” With their black shawls and their wizened, whiskered faces, they looked like extras from a Mafia movie, and when they said, “God bless her”—Dio la benedica—I felt blessed. During the daily visiting hour at the hospital, we arrived with flowers and biscotti, with magazines and clean socks. We sat on Sam’s bed and marveled at her roommates, who lay around in their thong underwear, smoking cigarettes out the window and chatting into their cell phones, five minutes after giving birth; they teased us for rinsing out Sam’s enormous maternity briefs in the sink. We swatted zanzare—freakishly robust mosquitoes—and our brave, bright-hearted Sam shooed us away so we wouldn’t make her laugh so much she’d accidentally push the baby out. We gazed into the nursery window at the rows of bassinets filled with babies and I had a thought that was more like a pain under my collarbone, and that was probably something a little bit like prayer: “Let there be an absence of grief.”

“The twinning of loss and love seems suddenly to explain everything”

We don’t yet understand that nothing can stop this baby from coming. We don’t know that she will be smaller than a mozzarella—less than a pound. We can’t yet imagine how the preemie diaper will make her appear like a piglet wearing human underpants, or how the baby in the next bassinet, born only ten weeks early, will appear to us as enviably well formed as an adult. We don’t know that after a nurse curses and whacks at one of the life-support machines with the heel of her hand, after we all watch the baby’s fluttering breath in the tiny cage of her ribs and cry into our masks, I will say, inexplicably, “I really believe she’s going to be okay.” Or that years later, after the months of neonatal intensive care, after too many near-death experiences to count, a dramatic medical evacuation to the United States, the countless tanks of oxygen, the ceaseless fretting, this baby will be dark-eyed and beautiful, mischievous and, save a wintertime tendency toward bronchitis, perfect.

In the church, I force myself to look up into Mary’s eyes, to study the twisted agony of her mouth. I kiss my baby’s sleeping head, bend down to press my nose to the fragrant scalp of my own son, squeeze the hand of Sam’s older daughter. I am so sorry to see the limp curve of His only child, although I don’t actually believe in God. But standing before this stricken Madonna, surrounded by what I love most in the world, I wonder: Was an entire religion generated from a mother’s most fervent wish that her child not be dead? The twinning of loss and love seems suddenly to explain everything: To devote ourselves properly to one another, we must brave love’s terrifying undertow, which is grief. I am awed, suddenly, by our courage to love each other as recklessly as we do. Awkward and confused, rational and godless—I am all of these things. And yet this moment must be what people mean when they speak of grace.

“Remember?” Sam will say to me later. “Remember how you said she would be okay?” And I will say, “Yes,” because I do. “What made you say that?” she will ask me, and I will think, “Some things just seem kind of magical,” but it will sound too hocus-pocus to say out loud. “Because it’s how I felt,” I will say instead. And it will be the truth. 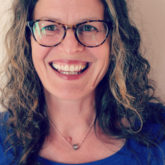 Catherine Newman is the author of the memoirs Catastrophic Happiness and Waiting for Birdy, and the blog Ben and Birdy. She is also the etiquette columnist for Real Simple magazine and a regular contributor to such publications as the New York Times, O, The Oprah Magazine, The Boston Globe, and many others. Her first middle-grade novel will be published next year. She lives in Amherst, Massachusetts, with her family.