Cherishing a Patchwork of Potential

My origin story begins in an under-resourced environment riddled with social challenges such as poverty, gun violence, drug abuse and at times death. The 1980’s were not kind to many inner-city neighborhoods, as police cracked down on prostitution, drug trafficking and other symptoms of drug addiction and poverty, especially in Philadelphia where I grew up. Terms like “grateful living” were for privileged ears and were not embedded in the vocabulary of friends, family or even my peers. Looking back, I am able to recognize that there was indeed a throughline of gratitude and gratefulness in my upbringing, we just never called it that. I had a much more intuitive relationship with these principles and they became a function of my childhood in practice more than in theory. Let me explain.

I learned to view my community as a patchwork of potential in which innovation and imagination created opportunities for me to be resourceful, creative and generous.

There were two locations in which I found safety and shelter: the house I lived in, where my parents created a home; and in the car, riding with my father. His conversations transformed the car into a classroom, and he shared his wisdom with me through stories and the books he read. On one particular car ride with my father, I had an encounter with the world outside my front door in a way I had never experienced before.

The loudest question in my head was, “How can I help?”

We were riding through downtown Philadelphia and I saw a homeless man sitting in front of a church on the corner during rush hour. My 7-year old eyes were decorated with wonder and curiosity, and a slew of questions ran through my mind. The loudest question in my head was, “How can I help?” 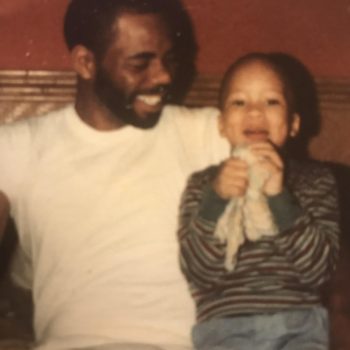 My father sat in the driver seat as a red light paused our ride. He was a stern patriarch with a carpentry skill set and an entrepreneurial work ethic. He believed you received what you earned, the ultimate karmic law. My parents were both blue collar workers and decided to provide a weekly allowance if I completed my chores. Well, on this day I had ten dollars in my pocket that I had earned over the previous weeks. Again, that question came to my mind, “How can I help?”

The red light felt like an eternity. I noticed the sadness in the homeless man’s face, the disposition in his body as he slouched over the cane in his hand. “How can I help?” The voice in my head now getting louder. I don’t remember red lights being this long on Broad Street. The pressure mounting for me to do something; although I was not technically obligated to do so, I felt obligated to as a human being.

It was at this moment that I learned something powerful: being grateful for what I have isn’t so I can get more, it’s so I never forget that less really is more.

That I know of, I did not see that man, on that street corner, in front of that church, with his hand on his cane ever again. However, I know I have seen his face in the faces of others almost everyday. It was at this moment that I learned something powerful: being grateful for what I have isn’t so I can get more, it’s so I never forget that less really is more. Truth be told, each time I see a ten dollar bill I’m reminded to cherish every single moment I am granted on this earth.

On a recent morning ride while driving my son to school, I was reminded of this story and the ride I took with my father, who has now transitioned. Looking in the rear view mirror, my son and I locked eyes. In his eyes I saw trust, safety, love and gratitude. He is my inspiration and my legacy. Moments like that are a constant reminder for me to embody gratefulness in the way I walk, talk, eat, think, commune, and approach my daily living. 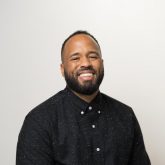 Philadelphian Greg Corbin is a son, brother, husband, and father as well as an educator, poet, writer, healer, leadership coach, and mental health advocate. A Lincoln University grad with 20 years of experience in education, arts, and human development, he strives to innovate and create strategies that amplify holistic community engagement. He is the founder of the award-winning and nationally recognized Philly Youth Poetry Movement and cofounder of the Slam League, both transforming thousands of lives. He is also the former director of Restorative Justice at Mural Arts Philadelphia, where he led the charge for workforce development programming and job creation at the intersection of public art and equity. His latest book, Breathing Ashes: A Poetic Guide to Walking Through the Fire and Coming Out Reborn, is an anthology about navigating adversity and rediscovering purpose through topics such as masculinity, human development, self-awareness and self-care.

Greg has been highlighted as a keynote speaker at conferences and festivals across the globe, and has shared stages with Nikki Giovanni, Tobi Nwignwe, Sonia Sanchez, The Roots, Mos Def, Common, and others. He has also been featured on HBO, BET, CNN, and Ted Talks.  Connect with his work at gregcorbinspeaks.com and on Instagram @gregcorbinspeaks.

Editor’s Note: We are excited to have Greg Corbin working with us as our Project Lead on a youth video story project entitled, Bright Lights, Young Lives. Stay tuned for some of his beautiful work coming to our website this fall.