When we think about immigration, we often think about the borders between countries, but in many ways, the most profound border exists within communities: the border between “us” and “them.” …Welcoming America inspires cultures of belonging so that places around the world can become vibrant places for all.

Here in our feature “Grateful Changemakers,” we celebrate programs and projects that serve as beacons of gratefulness. These efforts elevate the values of grateful living and illuminate their potential to transform both individuals and communities. Join us in appreciating the inspiring and catalyzing contribution these Changemakers offer to shaping a more grateful world. 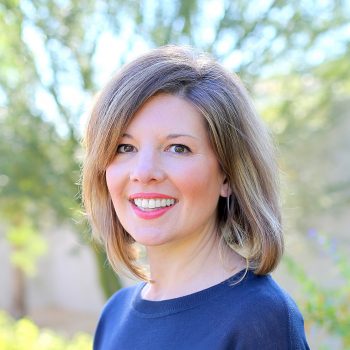 Today, Welcoming America and the Welcoming International initiative work with 200 communities in the U.S. and six countries to support local leaders in building more welcoming communities. By providing a roadmap and direct support to local nonprofits and governments, the organization helps communities become more inclusive toward immigrants and all residents. Executive director Rachel Peric shares more about how Welcoming America inspires cultures of belonging so that places around the world can become vibrant places for all.

What sparked the founding/creation of Welcoming America?

Welcoming America’s story began in the early 2000s in the American South. Our founder, David Lubell, launched a project called Welcoming Tennessee that successfully countered a growing backlash toward immigrants in the state. By helping new neighbors find their common values and move past their fears, it set the stage for more people to belong and participate in the civic, social, and economic life of the place they called home – whether they’d lived there all their lives or were new to the community. The spark was a rapid demographic change, something we’re seeing not only here in the U.S., but around the world due to migration. Welcoming America took shape after recognizing that communities everywhere benefit from deliberate efforts to work through that change and help new and longtime residents thrive and belong together.

How does Welcoming America fill a need for local communities? What is the importance of your work at this time in particular?

When we think about immigration, we often think about the borders between countries, but in many ways, the most profound border exists within communities: the border between “us” and “them.” Especially in a world that is on the move like never before, communities need to cultivate a greater sense of “we” across that border, which can cut across race, origin, status, religion, gender – the list goes on. Residents with immigrant backgrounds are being overlooked,  not only in terms of receiving benefits, but as leaders in designing a response that actively takes their knowledge and perspective into account.

It’s tragic that so many of us – particularly if we’re Black, Latinx, or Indigenous – lose our lives and livelihoods because our communities and institutions are operating as exclusive islands. Ultimately, being welcoming is about breaking down those barriers at an interpersonal, institutional, and community level, and making inclusion simply business as usual.

Lots of communities want to do this work but need the know-how and support to get there.  Welcoming America provides the technical assistance, funding, and expertise for local nonprofits and governments to build those bridges and reduce barriers to opportunity and leadership. We also worked with our members to create a Welcoming Standard so that communities of all sizes have a roadmap and understand what success looks like. We’ve even created a program called Certified Welcoming that certifies communities against this standard so that local leaders can show that their values are backed up by action, and be recognized for their efforts.

How do you see Welcoming America as embodying gratefulness through its work?

Gratitude begins with an acknowledgement of our own agency in shaping how we engage with the world, and so does the practice of welcoming. Welcoming America’s work is a vehicle for people to recognize and grow their own inherent capacity to create an environment in which all of us can belong.

Welcoming America and our members work to connect communities, build and scale inclusion, and bring change to systems and cultures. None of this would be possible without leaders who extend themselves beyond what’s required, volunteers who give their time and resources. As a network, we’re fueled by our gratitude for one another and our numerous partners who believe in a more inclusive, democratic, and just world. 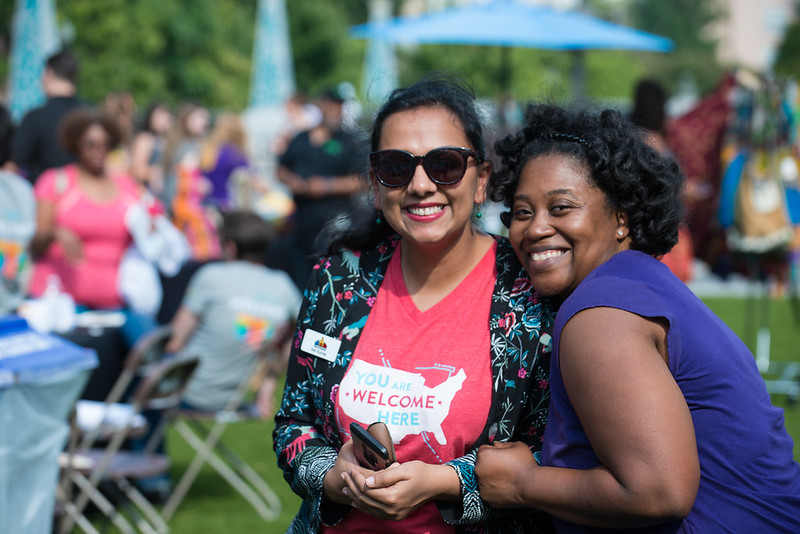 Welcoming Week celebration in Decatur, GA (where Welcoming America is based), 2019

Being welcoming is an act of gratitude and courage taken by both newcomers and longtime neighbors alike, an act that requires not only seeing but appreciating our differences, overcoming hardwired biases, and extending ourselves across extremely segregated places.

Because let’s be honest: while some of us may be intrepid explorers, most of us really dislike moving out of our comfort zones, even when we know it’s the right thing to do. Politicians know this and prey on our base instincts and fears. Gratitude helps inoculate us from this fear.

When our behavior, laws, and institutions embody these values, we can move from a place of merely tolerating each other to a truly inclusive democracy. Communities are the role models and proof that doing so is not only something we can aspire to, but is being lived out every day in practice.

A great example of this would be Welcoming Week, our annual event happening this year from September 12-20. Here, we celebrate the spirit of welcoming by taking the time to reflect on the shared benefits of inclusion, as well as its challenges. Welcoming Week fosters a culture of gratitude that reminds us we need each other to make this work. Anyone can join, so we hope you will!

What inspires partners and individuals to participate in the Welcoming America network and events?

All of us yearn to be part of something bigger than ourselves. I think the Welcoming Network and our events attract leaders who are eager to create more inclusive institutions and communities. They come for practical tools, ideas, and connections to others like them: people who want to make their communities places where everyone can belong. 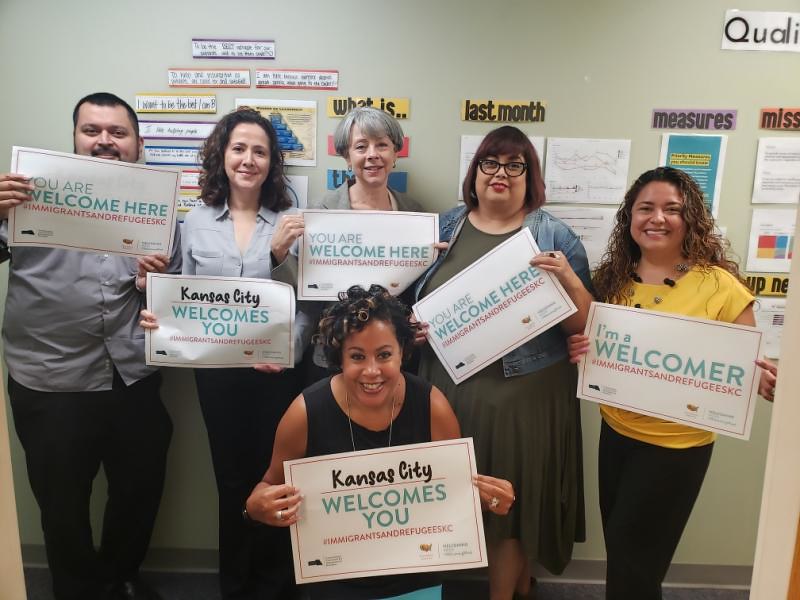 What is the lasting impact? What are the ripple effects of your work?

Welcoming is meant to counter the roots of some of the problems we see today in a divisive, politicized world. We began with just a handful of members a decade ago, and have grown to become a network of leaders in the U.S., working in communities home to one in eight Americans, and globally, seeing governments like New Zealand adopt a Welcoming Communities strategy as part of their federal agenda.

What this means is that being welcoming is not only being prioritized, but institutionalized.  We’ve seen more than 40 cities and towns in the U.S. create offices within local government to support immigrant inclusion, and more than 600 new policies and practices put into place over the course of the last year helped neighbors feel safe, join boards and commissions, open businesses, buy homes, and put down roots.

Together, welcoming communities have also played a critical role as a voice countering anti-immigrant rhetoric and policy at the federal level, while also shaping more inclusive policy at the local level. These initiatives take months, sometimes years, to see the outcomes – and that’s OK. Few of the biggest problems in the world are resolved quickly; like any good relationship, it takes time and effort to grow.

Lately, in this new era of civil rights justice, we observe more places proclaiming to be “welcoming communities.” Even if the definition of welcoming and how it’s practiced may look different from community to community, it is clear that the notion of being a welcoming place is meant to be attractive, affirming, and powerful. Our hope is that welcoming – in its truest form – becomes an essential value of all communities.

What are some of the common barriers and obstacles that arise through your work? How are they addressed?

Local leaders have to face many competing priorities, from making sure their communities are safe and healthy, to making sure families have good paying jobs and a bright future for their kids. It’s easy to overlook the fact that none of these are achievable if we don’t have the social capital and trust to work together as neighbors, are deeply segregated, or don’t see each other as worthy of sharing in the benefits of democracy or economy.

Addressing racism, xenophobia, and other forms of “othering” is about getting to the heart of the matter and the biggest impediment facing our society right now. While there are certainly lots of stories out there about heroes and villains, most people are bystanders who need a reason, support, and an easy way to become upstanders. I see our work as speaking especially to upstanders and bystanders and giving them tools to create a welcoming environment, whether that’s within a library, a community center, or the halls of government. 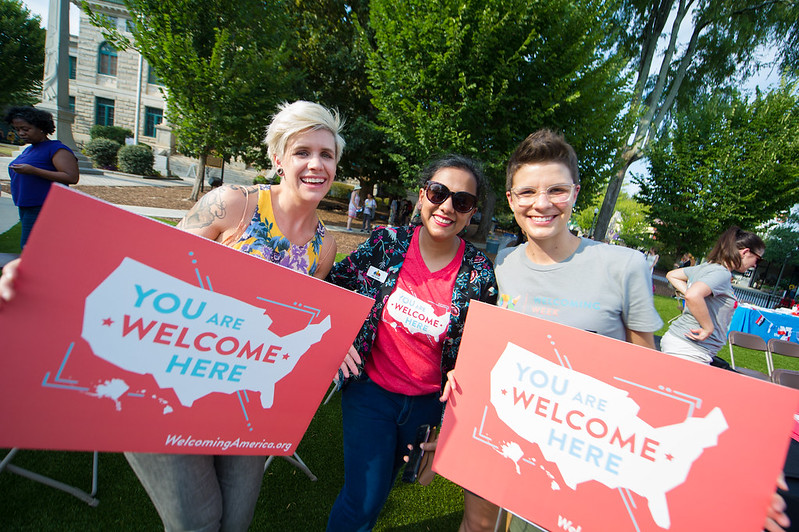 How does Welcoming America plan to grow?

Our highest aspiration is for welcoming to become a social norm and for every community to be able to meet the bar for being welcoming in practice, which is defined by our Welcoming Standard. We know that in order for that to happen, we need lots of places – large, small, rural, urban – to demonstrate success, and the leaders who can make that happen to be supported as change agents.

To achieve that, we want to grow positive role models who inspire others. This helps us continue to draw a network and movement that reinforces itself.

Lastly, we need institutions like local governments, libraries, museums, parks, etc. to focus on the task of making communities places where all feel they belonging. If you consider yourself a champion for this cause, we’d love for you to join us, too.

If you could encapsulate one message for people who participate in Welcoming America, what would that be?

I’ll share the message that the late Congressman John Lewis shared with me: Be persistent; people change. I have seen what the relentlessness and grace of welcomers everywhere has accomplished, and remain hopeful for all that this powerful movement can and will achieve.

If you could share one message about living gratefully, what would it be?

Living gratefully is a powerful antidote to the destructive forces around us when we put life itself at the center, and affirm the abundant creative forces that biodiversity in all its forms brings when we treat it as our greatest treasure.

To learn more about Welcoming America and Welcoming International, visit the websites: welcomingamerica.org and welcominginternational.org

Do you know of a project/program that elevates the values of grateful living? If so, we invite you to nominate them for our Grateful Changemaker article series.