Leaping into the Unknown

Whether big or small, the Unknown beckons us to move forward, explore new ways of behavior and living, touch Life at new points, connect with the ground of our Being.

Nothing holds greater power in our life than the Unknown.

The Unknown always calls us, and we can respond either by ignoring or acknowledging it. It may be a simple call, such as following a strange animal sound at night, or trying a new bad-smelling dish in a foreign land, or replacing a daily practice with something novel. It may be a larger call that requires us to change our life: depart from our country, change our job, embark on a bold adventure. Or it may be the highest call of which we can conceive: the search for meaning and purpose in our life, or the search for God. Whether big or small, the Unknown beckons us to move forward, explore new ways of behavior and living, touch Life at new points, connect with the ground of our Being. By moving within the field of the known and familiar, we stop learning and developing; by moving towards the Unknown we expand and evolve.

Yet many fear the Unknown. There are many reasons for this fear: evolutionary ones that have their roots in the ingrained archetypal fear of animal predators or human enemies lurking in the dark; psychological ones rooted in our love of well-established routines; social ones related to our sense of belonging and our need to conform to group behavior; existential ones having to do with the fear of encountering the light after getting used to living in our Platonic cave. Still, in spite of this fear, the lure of the Unknown is unmistakable in our life. We may push it aside for a while, we may pretend it is not there or deny its existence, but its call, in any of its many forms, keeps returning. The restlessness at the core of our being cannot allow us respite for too long. 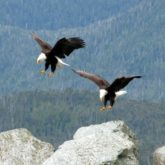 Many say they are willing to explore new possibilities in life, new ways of living, or to move into new fields of creativity and activity. However, the fear of the Unknown gives rise to a ubiquitous defense mechanism that causes many to remain idle or even completely immobilized in the Known: because of fear they try to move into the Unknown while remaining enmeshed in what they are already doing. They want to stand with one foot on the Known while groping with the other foot in the darkness of the Unknown so that they may find the point on which to make their next step. In other words, they supposedly want the Unknown and are moving towards it, while they are still busy reaping the fruits of the Known. But this is not how Life works: The movement towards the Unknown requires that the Known be left completely behind. Just as the adolescent boy must leave his mother’s bosom to become a man, or, to use Kahlil Gibran’s great simile, just as “alone and without his nest shall the eagle fly across the sun,” the power within the Unknown is only released after we fully and fearlessly surrender to its mystery. The nest is warm, comfortable, and safe, but one cannot become an eagle without making the huge leap into the air to test one’s wings in the vastness of the unknown, frightful sky. The Unknown does not reveal its gifts unless one relinquishes all contact, all attachments, all footing on the Known.

Every Unknown that stands before us in our life demands that we completely relinquish our footing on the Known. Once we do that, every Unknown reveals itself in all its might and grandeur.

How could it be otherwise? The Unknown obtains its nature through its contrast to the Known. If we could first define, or explore, or understand the Unknown while standing on the Known – in order to get the Known’s “approval” – the Unknown would cease to be unknown! Actually, there is no way we can ever know the Unknown unless we meet it on its own terms! It is through and by those terms that the Unknown releases its inherent power. Just as the sky only offers the abundant gifts of flight and ethereal freedom to the young eagle after the bird completely leaves behind the nest he was raised in, every Unknown that stands before us in our life demands that we completely relinquish our footing on the Known. Once we do that, every Unknown reveals itself in all its might and grandeur. The only way to learn to fly is to spread and flap your wings in the air; the only way to learn to explore new places is to leave your home and start exploring; the only way to begin a new life is to begin it. And no, these statements are not tautological! Moving into any Unknown is an act. And this act is different from the endless “thinking about it,” “planning it,” “preparing for it” – the equivalent of the useless activity of a hapless eagle daydreaming about his imminent first flight. Yet this is the main reason why many people fail to move into the Unknown: they think they may plan it, or prepare for it, or get to know it first while remaining where they are. They even begin to invent “the conditions” the Unknown supposedly requires of them so that it may come to meet them. But all this tossing about, all this supposed preparation, is none other than a self-deceiving game they play with themselves in order to cover the inherent fear of the imminent leap.

But there is nothing to fear; the Unknown must be embraced. Everything that belongs to the Known of today was once Unknown. So the Unknown is just the name we give to the experiences and knowledge we are yet to gain. Meditating on how we once feared today’s Known because it was Unknown, and how irrational these past fears were subsequently proved to be, we realize that our present fears will soon be equally proved to be unfounded.

The Unknown is the great silent force that has been moving our life since our birth. It is its lure and power that helped us grow and become adults, that gave us all the knowledge we have, that created the wonder and magic of the great flight of the eagle that is our life.