“What I want to tell the youth is that their voices do matter, that they can start making change now.”  ~ Anthony Chavez

Walking in the footsteps of his grandfather, Anthony Chavez wants to make a difference in the lives of young people.

“What I want to tell the youth is that their voices do matter, that they can start making change now,” Chavez says.

Anthony is the grandson of César Chavez, who formed the United Farm Workers union and led the Farm Workers Movement in California in the 1960s, fighting for civil rights while promoting nonviolence. 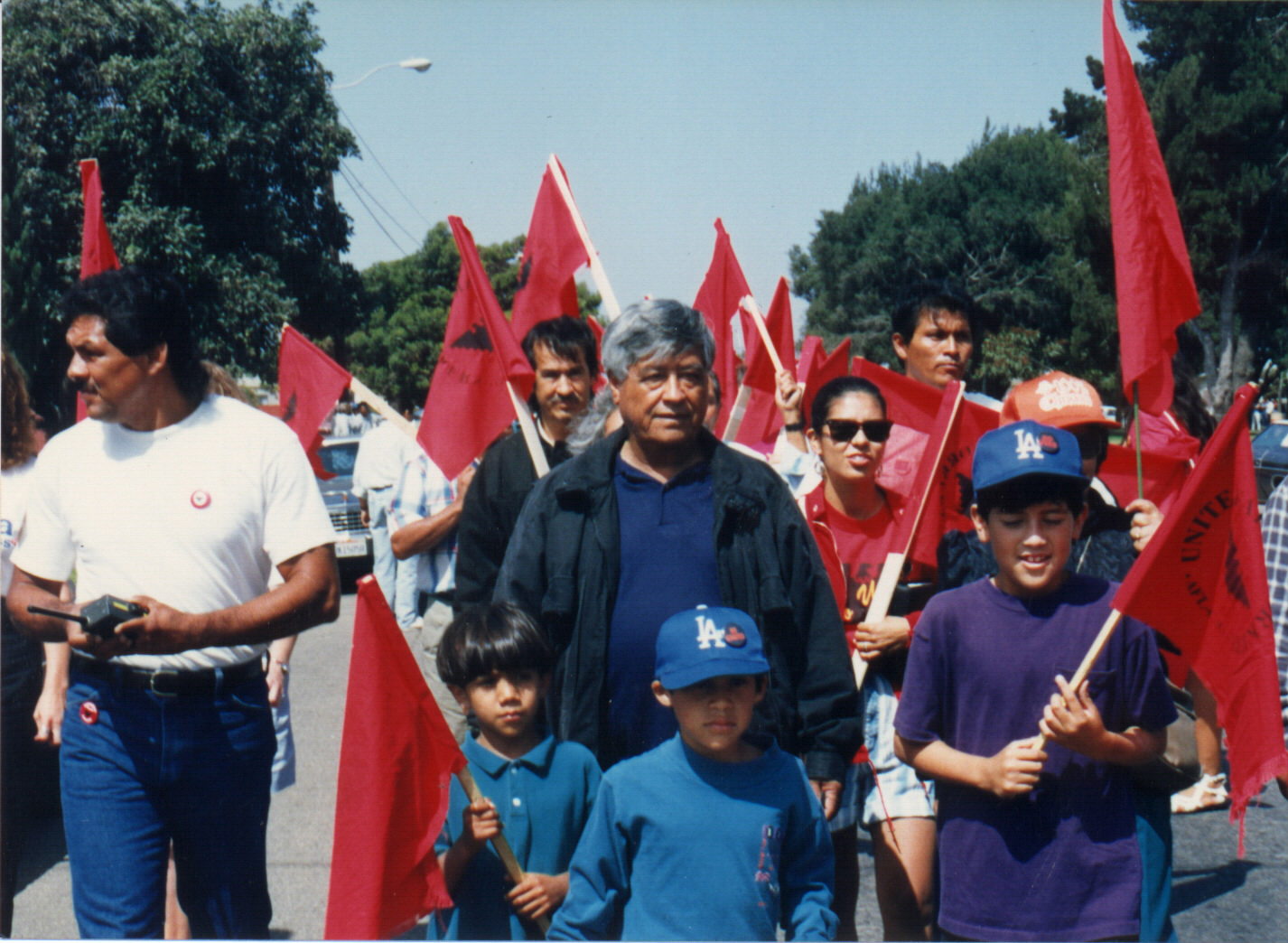 Cesar Chavez in a 1992 Lamont, CA march, accompanied by three of his grandchildren: Anthony, Arthur and Juanito (L-R in front of him)

“I remind students what my grandfather said, ‘We don’t need perfect political systems, what we need is more perfect participation,’” Chavez has said.

Anthony, the oldest son of Socorro and Paul Chavez, César’s oldest son, grew up attending UFW marches and political efforts and now travels the country speaking on behalf of the César Chávez Foundation.  He speaks about the legacy of the farm worker movement and of his grandfather, while advocating for service learning and character education initiatives with the Alameda County Office of Education.

“What we do is share this one example of history — my grandfather — to try to move others to make a difference,” says Anthony Chavez.

But Anthony does more than speak about the social impact of his grandfather.  He conveys the internal character, sacrifices, and commitment to service, compassion, and community that made the external impact of his grandfather’s work possible.  Anthony tells students that civil rights icon César Chavez was able to improve the conditions for American farmworkers and mobilize 17 million people worldwide in a California grape boycott because he recognized the power individuals could have when they joined together to fight for justice.

“He always used to remind us there’s never a time in our life when we don’t need the help of another,” Anthony says, connecting his grandfather’s activism with that of Gandhi, Martin Luther King, Jr., and contemporary uprisings in the Arab world.  “The end of all education should be service to others,” he says. “I want to remind you to aim high, dream big, follow your heart.”

Listen to the recorded Awakin Call to learn more about Anthony Chavez’s inspiring journey and work.

Anthony does not come by these lessons of character and integrity lightly.  He spent many years serving as travel assistant to Benedictine Brother David Steindl-Rast, world-renowned author, speaker, lecturer and inter-religious pioneer, during Brother David’s national and international tours.  And Anthony now serves on the board of Gratefulness.org, co-founded by Brother David, and as an adviser to both the Fredrick Douglas Family Initiative and the President’s Advisory Council at Character.org. 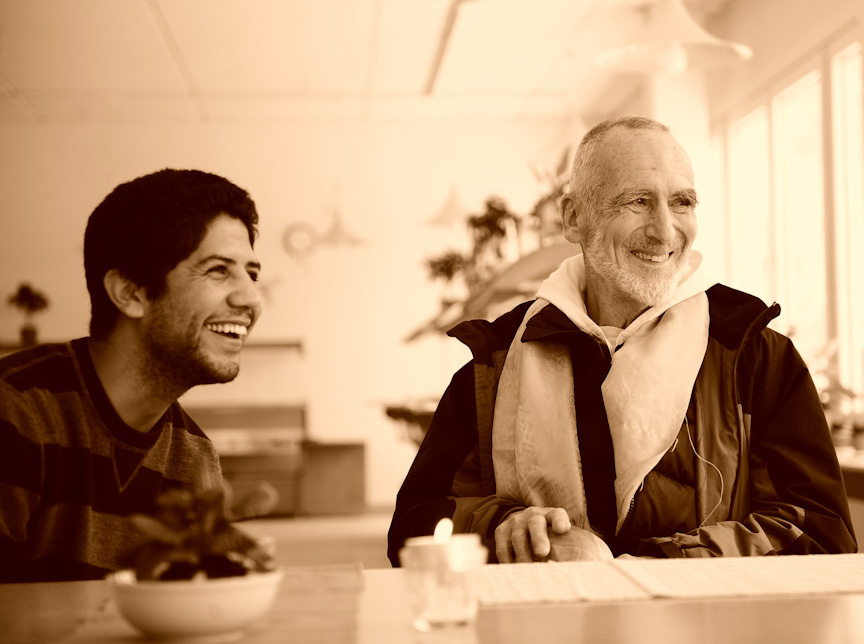 “When Brother David spoke, his words carried weight, and that’s something I enjoyed – being in his presence – that his words carried weight.  Even when he was joking around …. That kind of just represented the integrity, and the discipline, and who he is,” Anthony says.  “As I was going through religious studies and had transitioned over from political science and economics, I was very interested in looking at ways that we can be of service to one another, looking at ways where we could find these fine threads that unite us all together at the core… I realize that a lot of my grandfather’s work and the work of Mahatma Gandhi and MLK Jr. was very simple – and it was all on the premise of respecting a human life for what it was… MLK Jr., what he was aspiring toward – even though it was to help the African American population in the south with all the racism and hatred or anger he was dealing with – he reminded them it was about everyone’s wholeness, for everyone’s well-being; to make sure we can live in a just world together.  That’s what I realized about Brother David’s message [of gratefulness and thanksgiving and gratitude] – that it goes right down to the fundamentals and to the essentials and to the priorities of reminding ourselves that we should be grateful for the lives that we have and the lives that we share … by learning to respect the life that we belong to and the life that we have, it allows us to shape a new course of action because we put ourselves in a very mindful, a very considerate, a very compassionate (if you want to call it that) view or vantage point so I think it calls for a certain action out of us and we start to see things in that new light.”

In speaking with youth, Anthony is motivated by the belief that all real change comes down to “just talking to people and helping them gain the courage to realize they can do extraordinary things.”  Citing Brother David’s words that “real wisdom begins with wonder, and curiosity and caring come from the same place,” Anthony believes it is “important to ask questions – enter into the conversation, mindful, thoughtful, considerate conversation with people – that’s how you begin to make yourself aware.”  From this place of curiosity and conversation, Anthony encourages youth to speak out about the things that are important to their hearts, and to those things that make each of them individually “feel like you need to speak out and say something.  Find your place of entry.”  He says that the best place to start is to begin with issues that call the greatest amount of attention to each person uniquely. 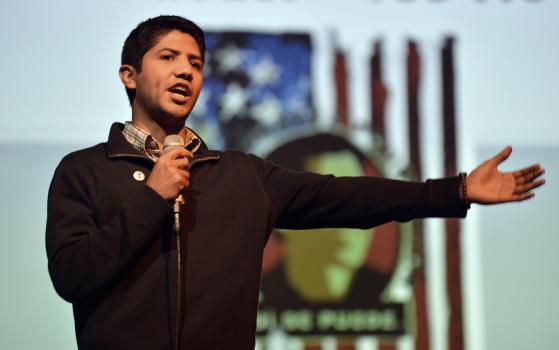 Anthony recognizes that “it’s all about turning the little me into the big we.”  “It’s very hard when people ask me ‘what are YOUR dreams, what are YOUR aspirations, what’s YOUR ambition?’  Me?  I don’t know about me or mine or your?  I think I’ve been shaped, and I’m glad to be shaped this way, where try to think of the larger we, because the little me is always taking care of itself, it’s always attending to its needs.  So you could actually not focus on yourself and you’ll still manage to take care of yourself but you could also do a lot more for other people.  And I think in doing more for other people you actually receive quite a bit.  By giving you receive a lot actually.  And so I think that’s really what re-energizes me, it’s just connecting with young folks, and seeing their sheer brilliance their creativity their imagination their caring their curiosity and telling them to run with it.”

Printed with the kind permission of our organizational partner, ServiceSpace on their DailyGood website.

Listen to the recorded Awakin Call to learn more about Anthony Chavez’s inspiring journey and work.

Syndicated from Awakin.org. Awakin Calls are weekly conference calls that anyone from around the world can dial into at no charge. Each call features a unique theme and an inspiring guest speaker.